← Is the Bible Imperfect, or Was God Unable to Create it Perfect?
A Manual for Creating [totally unreasonable] Atheists →

Part of the reason I didn’t write a review on the blog for Peter Boghossian’s A Manual for Creating Atheists is because I knew that my reaction was the same as most Christians who are informed in matters of faith and philosophy. Sure enough, Nick Peters wrote the exact review that I wanted to. 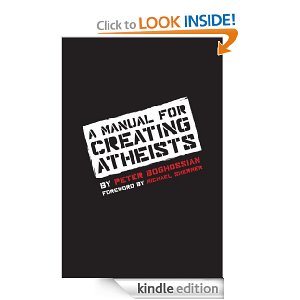 What do I think of Peter Boghossian’s book on creating atheists? Let’s talk about it on Deeper Waters.

Boghossian’s book in the past month or so has been the subject of great conversation on the internet. Why is this the case? Is it because there’s a new argument in here? No. There’s nothing new. Is it because there’s a really powerful demonstration of atheism in here? No. That’s not here also. It’s because now, Boghossian claims to have a way to apply principles of critical thinking and train others in them so that they can become “street epistemologists” with the goal of deconverting others.

Unfortunately, what I’ve seen is that these epistemologists are thoroughly unequipped for the job, and it’s no surprise because the apple has not fallen far from the tree.

And yet at the same time, I found great confirmation for so much of what I’ve been saying…

Posted on February 22, 2014, in Apologetics. Bookmark the permalink. 1 Comment.

← Is the Bible Imperfect, or Was God Unable to Create it Perfect?
A Manual for Creating [totally unreasonable] Atheists →