For JoeUnseen’s second request, he wants to know how long the law and Prophets last.

In Luke 16:16, Jesus said, “The Law and the Prophets were until John; since then the good news of the kingdom of God is preached, and everyone forces his way into it.”

Forever?  Or until John the Baptist?  Let’s look at the context of each passage to find out.

Read the entire passage in Luke 16:

The Pharisees, who were lovers of money, heard all these things, and they ridiculed him. And he said to them, “You are those who justify yourselves before men, but God knows your hearts. For what is exalted among men is an abomination in the sight of God.

“The Law and the Prophets were until John; since then the good news of the kingdom of God is preached, and everyone forces his way into it.But it is easier for heaven and earth to pass away than for one dot of the Law to become void.” (vv. 14-17)

Do not think that I have come to abolish the Law or the Prophets; I have not come to abolish them but to fulfill them. For truly, I say to you, until heaven and earth pass away, not an iota, not a dot, will pass from the Law until all is accomplished. Therefore whoever relaxes one of the least of these commandments and teaches others to do the same will be called least in the kingdom of heaven, but whoever does them and teaches them will be called great in the kingdom of heaven. For I tell you, unless your righteousness exceeds that of the scribes and Pharisees, you will never enter the kingdom of heaven. (vv 17-20)

For God has done what the law, weakened by the flesh, could not do. By sending his own Son in the likeness of sinful flesh and for sin, he condemned sin in the flesh, in order that the righteous requirement of the law might be fulfilled in us, who walk not according to the flesh but according to the Spirit. (Rom 8:3-4)

Put another way, “… Christ is the end of the law for righteousness to everyone who believes” (Rom 10:4).  Paul felt he had every reason to rely on the Law for salvation (Phil 3:4b-6), but he wrote to the Philippians that Christ is his salvation:

… whatever gain I had, I counted as loss for the sake of Christ. Indeed, I count everything as loss because of the surpassing worth of knowing Christ Jesus my Lord. For his sake I have suffered the loss of all things and count them as rubbish, in order that I may gain Christ and be found in him, not having a righteousness of my own that comes from the law, but that which comes through faith in Christ, the righteousness from God that depends on faith— that I may know him and the power of his resurrection, and may share his sufferings, becoming like him in his death, that by any means possible I may attain the resurrection from the dead. (Phil 3:7-11)

Meme Crushing by Request #1: Seeing the Face of God 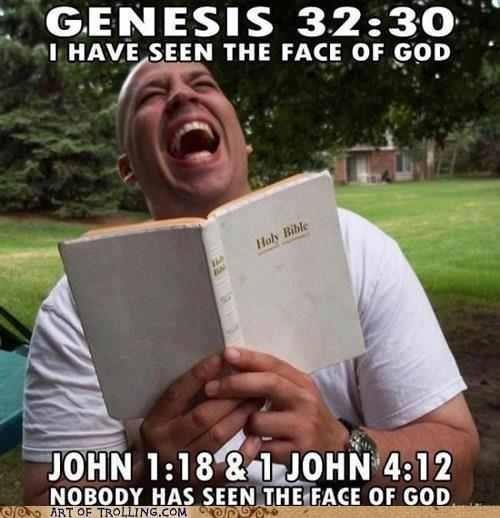 I’ve seen some funny parts in the Bible. I get the feeling this guy is supposed to be laughing AT the Bible, though.

There are a host of verses often set against each other in this same fashion.  It’s usually a sophomoric understanding of semantics used to cause confusion.

Let’s start with the new word: a theophany is a manifestation of God, but not the full glory of God.  Reading the entire passage of Genesis, we see that Jacob wrestles with a man (probably an angel, vv. 24-28).  The stranger is identified as God for the first time in verse 28, then Jacob proclaims he met God face to face and survived (v. 30).

But he didn’t meet God; only a representative.  And that is clear from the passage.  This is a theophany; a representation of God, but not God in his full glory.

I may have to buy a new pack of Victory Gum …

The Mystery of God

Any theism that didn’t ultimately point to mystery would not be a very believable world view. So we must not regret our final use of mystery. It is not an unfortunate, desperation ploy but a necessary part of any exalted theism.