Most memes that float around are plain ignorant, and thus are fairly easy to decimate.  And this one is no different: 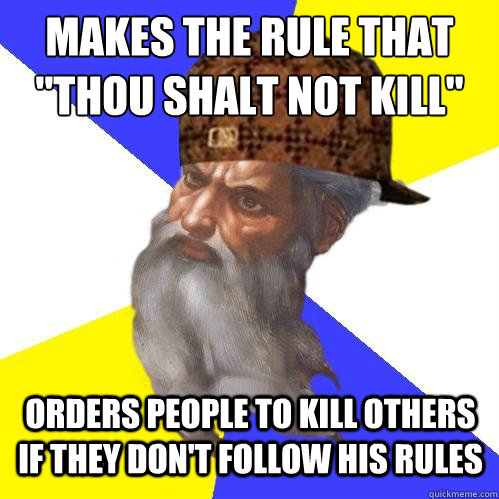 The first thing that we have to understand about God is that he is all three branches of our American government combined — he’s the original theocracy.  He is, in fact, referred to by titles that reflect that:

When God enacts a law as Lawgiver, he has the right to be both Judge and Executioner when enforcing said law.  God, like the State, can impose the death penalty for people who transgress the law.

The commandment referenced refers to cold-blooded murder.  Acts like self-defense or capital punishment imposed by the State are not in view and are not forbidden.  So God is not transgressing his own law by imposing the death penalty on a guilty party.  God isn’t murdering anyone, he is acting as Judge and Executioner.

So we are done here.  Next meme I crush is that lovely FB floater that asks if you still oppose gay marriage, and through a series of poorly-reasoned, badly-exegeted biblical examples shows you’re some kind of bigot.  It actually shows anything but that, as we shall soon see.