I have decided to put a quarter in the Wayback Machine and revisit my top 10 most viewed posts of all time. This considers only posts and excludes blog pages.

First up, the current most-viewed post is a reply to Matthew Bellasario, the self-proclaimed “Catholic Champion.” It highlights one of the starkest differences from the blog’s early years to now. When I first started it, I was staunchly anti-Catholic. As time wore on, I became much more neutral toward my former faith. And now? I’ve reclaimed most of it, my kids go to Catholic school, and I’ve even started praying rosaries.

I still agree with the points I make below about ad hominem arguments. Mr. Bellasario and his crowd of commenters can’t have their cake and eat it, too. If Protestantism is devoid of correct theology due to its leadership, then so is Catholicism because there’s been quite a bit of moral problems in the handling of many major scandals. 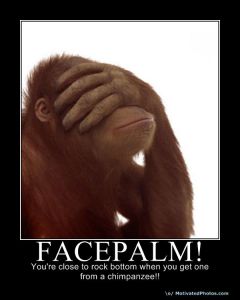 Reading the comment section of this post from the Catholic Champion blog, the only appropriate response is a resounding facepalm.

The main problem I had with the post is how misleading it is.  The headline implies that more Protestant denominations are caving on homosexuality (a sin, to be sure).  The linked article shows the opposite: the United Methodist Church is not caving on homosexuality; but a large number of former bishops are pressuring it to do so.  The article is applauding the denomination for being one of the few mainline Protestant denominations for standing on biblical ground when it comes to this sin.

I don’t think this is a very good argument against protestantism. The protestant reformers (and in this case Wesley) opposed homosexuality. So I don’t find it any more significant than some catholic priest or bishop dissenting from church teaching.

And the catholic church has become pretty liberal on some issues. The current pope doesn’t believe the opening chapters of Genesis are historical and one member of the PBC compared Gen. 1-11 to Little Red Riding Hood.

Personally, I don’t like using the arguments of specific personages because then scotju is free to make this (facepalm-worthy) reply:

Neil, Protestantism was started by men who were sexually immoral or who winked at sexual immorality. Luther, the founder of the tribe, ‘had’ to marry Katherine Von Bora to shut the mouths of his critics who were claiming he and Cathy were getting it on. Lther later endorsed a bigamous marriage for Philip of Hesse. That scandal left a permanent black mark on his reptation. Calvin, according to some authorities sch as St. Alphons Ligouri, was a vicious sodomite. Zwinghi lived with a mistress, and while a Catholic priest, had the gall to ask his bishop for permission to marry his live-in! The sexal immorality of the ‘reformers’ is pretty good proof God never used them to renew the church. Rather, it’s merely proof that they were heretics behaving as it was to be expected of such men.

But this reply strikes out. END_OF_DOCUMENT_TOKEN_TO_BE_REPLACED