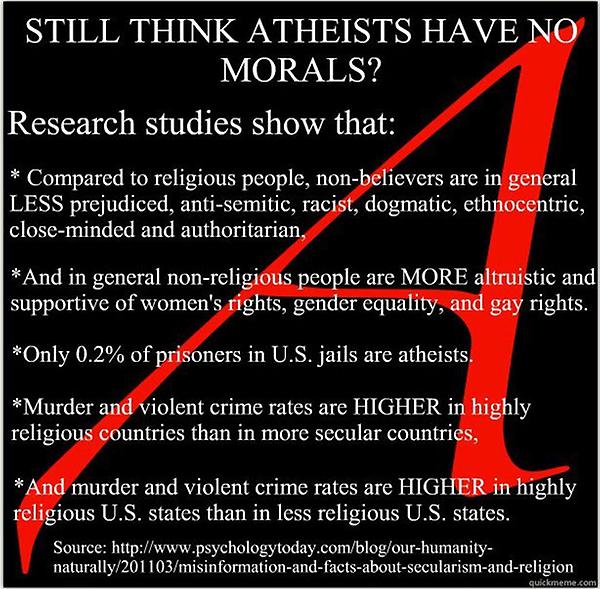 Did I say atheists have no morals? I don’t THINK I said that…

Atheists really like to fight against us ignorant theists who say they have no morals.  We’re the backwards hicks who take instruction from a book written by ignorant goat-herders who believed the earth was flat and that the sky was a dome that contained the sun, moon, and stars (all of which circled the earth!).  What do we know about morality?

Atheists are so enlightened that they’ve thrown off the shackles of God-belief and are doing the right things because they’re the right things, not because some ancient patriarch shakes his finger at you from 1,000 years ago and says, “Do it or I’ll spank you!”

So of course they don’t lack morals!  In fact, they’re more moral than religious people — the vague statistics quoted above don’t lie!

Sensing the sarcasm yet?

I hope so.  Because I don’t know how to lay it on thicker than what I just did.

Atheists are not immoral.  They are amoral.

Immoral means acting contrary to established morality.  It is a question of ethics, not ontology or epistemology.

Amoral means lacking morals.  It is a question either of ontology or epistemology, not ethics.

In Plato’s dialogues, Socrates asks the good priest Euthyphro what piety is.  Euthyphro comes up with several examples, which Socrates says were good but that only covers pious acts.  Socrates wants to know what piety is.

The above graphic does the same thing — it only shows that atheists behave more ethically than religious people.  But why do they do that?

They can’t tell you — there is no ground for morality given atheistic naturalism.  That’s where the difficulty starts.  Ethics can change; sometimes dramatically.

What we need is something to ground our ethics in; something immutable that we can return to to see what goodness looks like.  That way, when we find something new, we can create a code of ethics for it patterned after that which gave us the example of good ethics in the first place.

If morality is an immovable anchor and ethics are a boat on the rough, unforgiving seas of our culture, the boat is free to move about within the radius of the anchor.  It might go adrift, it might even do something unacceptable, but it will remain in the range of the anchor.  Conversely, without the anchor, the ship is free to be tossed around the sea of possibilities, moving unflinchingly into uncharted, dangerous waters with nothing to bring it back to safety.

The nature of God is that immutable ground of ethical behavior for the theist.  The atheist has none.  We are the boat that will return to safe waters, they are the one that will be tossed out to sea without a guide.

I have no problem with considering atheists ethical; the above examples show they are.  However, they have no ultimate ground for the morality that informs their ethics and that means they will go seriously adrift.