The Six Ways of Atheism: Way the Third 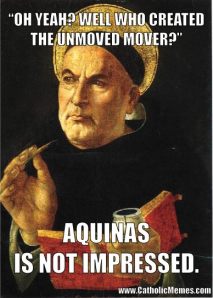 Next from Geoffrey Berg’s Six Ways of Atheism we have the God Has No Explanatory Value Argument:

Starting with (1), I agree that God should provide the answers to all of the ultimate questions.  When explaining the argument, however, Berg lists attributes of God (eternal, absolute good, purpose-giver) rather than explaining what big questions he means.  He only ends up asking one: How did the universe arise?

… [T]he answer for theists is, of course, God created it.  How did God arise?  Well, God has always existed.  But, why then, has the Universe not always existed?  Thus God can be cut out as an unnecessary extra.  Poor God, always being cut out as an unnecessary extra that contributes nothing to understanding except complication.  God is no more than a valueless extra intermediary stage in explanation.  (p. 64)

This didn’t work for Richard Dawkins in The God Delusion, and it isn’t going to work for Berg now.  “Who made God?” is not a valid retort.

With that settled, I don’t need to explain God’s existence.

If something exists, then it follows that everything it requires to exist also exists.  That means that if I find an Apple II/e in the middle of the desert, I can suppose that a human left it there even if I don’t know who this person was or how he came to be in the desert with an old computer.  The identity, purpose, and fate of this stranger is another inquiry for another day.

It would not be reasonable to surmise that the wind and the elements must have somehow randomly cobbled this computer together just because I can’t figure out who brought this machinery into the desert.

If that’s Berg’s only problem, then the argument falls apart when we move on to (2), since that’s the premise that God doesn’t explain anything.  He clearly does.

As to the anticipated objections, only two are worth mentioning.  The rest are pathetic as usual.  The first is that maybe there is evidence for God.  Predictably, Berg repeats the atheist mantra that there is no evidence for God.

Which is fine, but I’m merely pointing out that the entity we understand as “God” is the ultimate explanation of the universe, and the universe doesn’t exist apart from him.  That makes God self-evident, and for that we need no evidence.

That leaves Berg’s asinine reply to “God is by definition explanatory,” the second objection, in the cold.  We infer that a designer is necessary from the intricacies of the universe and diversity of biological life.  Given that causes not rooted in the necessity of being are external, we can further infer (2) since the universe began to exist at some point in the finite past (no infinite regress of past of events; there was a clear beginning).

We are not merely “defining God into existence” when we infer these two points; we first infer God’s existence then think logically to what he must be like and what attributes he must possess.  That God is necessary flows from his role as designer of the universe, not from our definition of him.  Our definition is shaped by deducing his attributes from the universe.