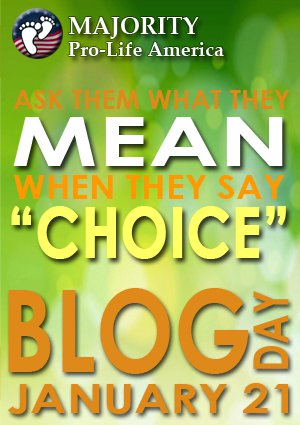 It looks like the pro-choice crowd is so pleased with having the ability to end a human life on a whim that they are actually celebrating the 38th anniversary of the day they were granted that “right.” January 21st is the sixth-annual Blog for Choice Day.

It’s not going to stop with blogs, either. Pro-choicers are called to use Facebook, Twitter, and other social networking sites to get the pro-choice message out.

Jill Stanek has announced a counter-initiative called “Ask Them What They Mean by Choice Day” for the same day. Each time a pro-lifer encounters pro-choice rhetoric, we should (as the name suggests) ask them what they mean by “choice.” Of course choice is code for “kill the baby.” Just like the term “reproductive rights” is code for “right to decide if my child lives or dies.”

Last I checked, the power of death and life belonged only to God, not to us. Short of saving the mother’s life (and even then I can still see a serious moral dilemma, but we live in a fallen world where sometimes choices like that become necessary), I can’t think of a single justifiable reason to abort a child that doesn’t use a lot of wild suppositions and far-out “what if” statements. Like, “What if the baby doesn’t get adopted and ends up in an abusive foster care home?” Or, “What if the baby is born with a terminal disease?” And so on. Those just dodge the issue.

Look for a post this Friday refuting some pro-choice positions that try to use the Bible against our pro-life stance. Under consideration will be Numbers 5:11-31 and 2 Samuel 11:15b-23. I’ll also contrast some philosophical details with scientific details of life.

Posted on January 19, 2011, in Morality, Pro-Life Issues and tagged abortion, Blog for Choice, right to life. Bookmark the permalink. 10 Comments.